This was at one point in time my book blog. As you can probably tell from some past posts, and the name -Read N Write This Way- That was in it's younger days. Now it is the New and Improved Read & Write & DESIGN this way. 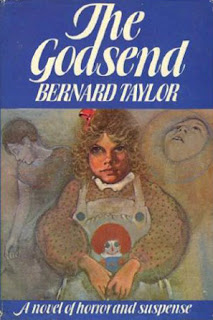 PLOT:
The story concerns the Marlowe family and an abandoned child named Bonnie, who they take into their home after being left with them by a mysterious woman they meet on a day out to a nearby lake. The story is told in first person by Alan Marlowe, the father of the family, who gradually starts to suspect that the subsequent tragic deaths of his children were caused by Bonnie. (taken from Wikipedia)


MY THOUGHTS:
I had mixed feelings about this book. In a way it was good, but then I wasn't thrilled with the way things just seemed to happen to the kids. It's weird because when the movie "The Orphan" came out in 2009 I was like that movies seems like a book I read, and in ways it was I mean not the whole plot or anything but the parent's adopting a Psychotic Orphan. where as the movie the girl was actually an adult this book the kid was actually a kid but she wasn't normal, and bad things appened around her. I bought it at a goodwill store and when I read the back cover (that's how I pick out most my books) it sounded interesting. It's a very thin book so anyone who can read a 500 page book in a few days can read this one in a few hours. So all in allit was ok.

Want to Link me